Young activist pledges to turn Kurdish case into an international one

Already, 2019 has been the luckiest year for Shaidan Mutasam who lives in Halabja province.

She has received three letters of recognition by three international institutions.The 26-year-old was appointed as one of the 100 Most Influential Figures in the Middle East by Union Middle East of Rights and Freedoms (UMEF) for the year 2018 on January 1.

Then, Canada-based Federal Association for the Advancement of Visible Minorities (FAAVM) nominated her as their ambassador for Women and Youth affairs in Iraq on January 19.

Two days later, she received another letter by Jakarta-based World Peace Committee, appointing her as their representative in Iraq.She told Rudaw English that hard work got her to this recognition.“Of course excessive working and constant attempts give you an experience and a wealth of friends and workmates,” she said. The nomination as one of the 100 most Influential Figures in Middle East is what she credits for spring boarding her success“I was the only Kurd to achieve the title.

This was my first step towards developing contact with local and international organizations,” she explained.Mutasam has been working as an activist at Youth Activity Development Centre (YADC) in Halabja.

She says this center and her family are the true force behind her success.

So what will she do now?“I have plans to work hard and turn the Kurdish issues into an international one,” said Mutasam.None of the three institutions have offices in Iraq or Kurdistan Region, making it hard for Mutasam to implement her plans.

She hopes for their offices to be set up so that her activities are not limited to Halabja. 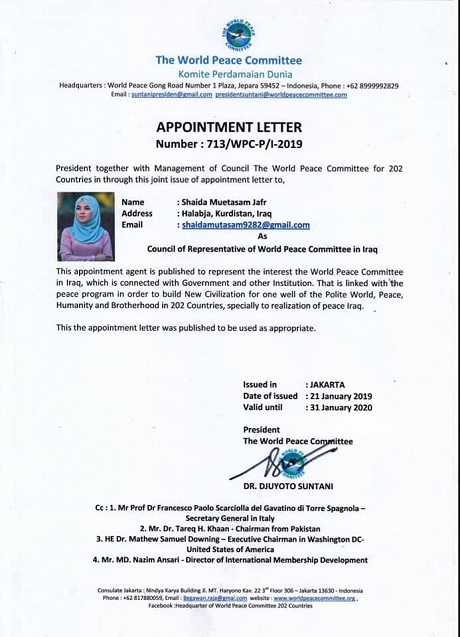