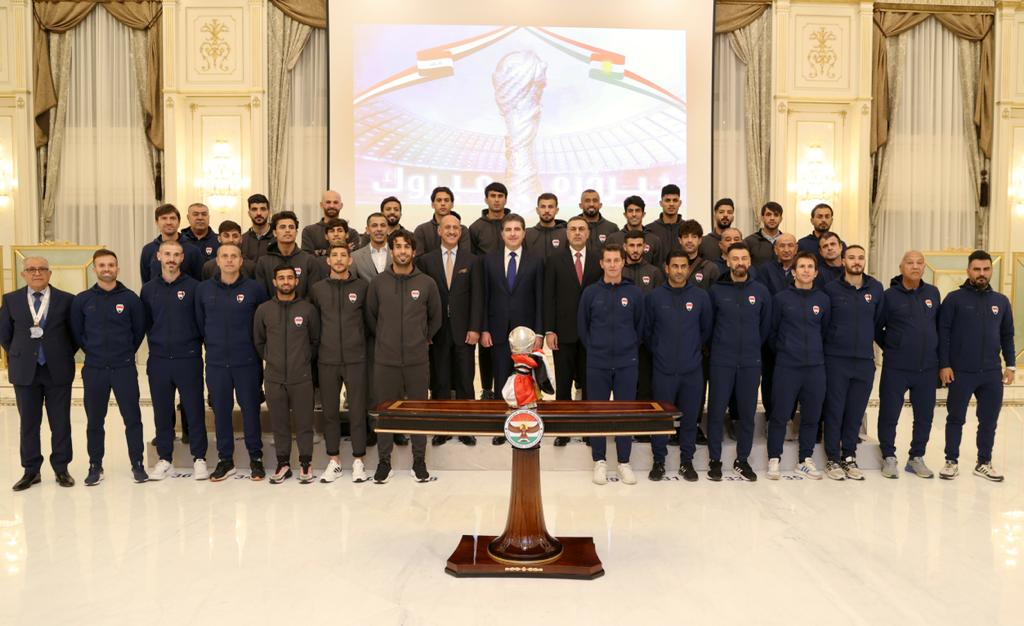 2023/01/24 | 22:54 - Source: Shafaq News
(ThisDay | Iraq News Now)- Shafaq News / President Nechirvan Barzani received the Iraqi national football team in Erbil this evening.In a meeting attended by the Minister of Culture and Youth of the Kurdistan Regional Government, the Governors of Erbil and Basra, the President of the Iraqi Football Union and a number of officials, President Nechirvan Barzani once again congratulated the Iraqi football team on winning the Gulf Cup held in Basra last week.The President welcomed the Iraqi national team to the Kurdistan Region and said that the victory of the Iraqi team in the Gulf Cup is a victory for the entire country and celebrated by everyone across Iraq; and on this occasion, people in all cities of the Kurdistan Region expressed their joy.President Nechirvan Barzani also stressed that this victory was important for Iraq and Iraqis, because it brought together all Iraqis around the victory, and conveyed a message to the world that Iraq has returned and stood up.

The President wished continued success for the Iraqi national team and thanked the Governor of Basra, the organizers, security forces and everyone who contributed to the success of the tournament.For their part, the President of the Iraqi Football Union, the Governor of Basra, the head coaches, players and members of the national team thanked President Nechirvan Barzani for attending the last match of the tournament and also for his support of the Iraqi national football team, expressing their delight over visiting the Kurdistan Region and meeting with the President.
Read all text from Shafaq News
Sponsored Links