IS ‘caliphate‘ in Syria dead within a month: commander 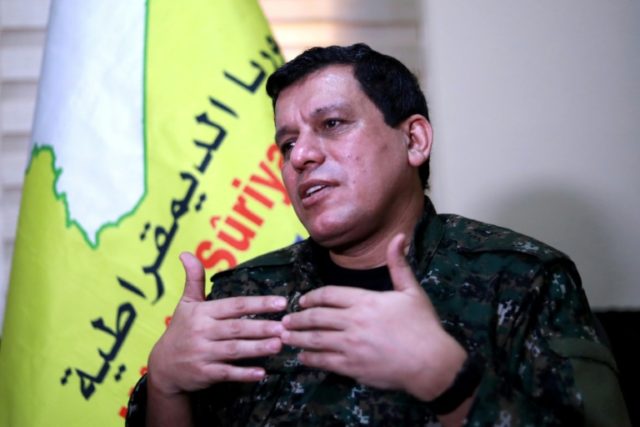 2019/01/25 | 10:02 - Source: Breitbart News
(ThisDay | Iraq News Now)- Military operations against the Islamic State group in Syria are wrapping up and the last pockets of the jihadists’ self-proclaimed “caliphate” will be flushed out within a month, a top commander said.

Mazloum Kobani, the chief of the Kurdish-led Syrian Democratic Forces (SDF) spearheading the battle against IS, told AFP that its “special status” should be preserved in any talks with the Damascus government.

“The operation of our forces against IS in its last pocket has reached its end and IS fighters are now surrounded in one area,” said Kobani, the top commander of the SDF.

With backing from the US-led coalition, the SDF are in the last phase of an operation started on September 10 to defeat the jihadists in their Euphrates Valley bastions in eastern Syria.

“We need a month to eliminate IS remnants still in the area,” said Kobani, who spoke to AFP on Thursday near the northeastern Syrian city of Hasakeh.

A few hundred IS fighters are defending a handful of hamlets near the Iraqi border, the last rump of a “caliphate” which the jihadist organisation proclaimed in 2014 and once covered territory the size of Britain.

“I believe that during the next month we will officially announce the end of the military presence on the ground of the so-called caliphate,” Kobani said.

Intense fighting in the area known as “the Hajin pocket” has left hundreds of fighters dead on both sides, according to the Britain-based Syrian Observatory for Human Rights war monitor.

IS lost the town of Hajin late last year and the subsequent collapse of its defences saw the SDF — an alliance of Kurdish forces and local Arab tribal fighters — conquer one village after another.

Kobani said their battle had been complicated as IS shifted its strategy after the SDF ousted the jihadists from their de-facto Syrian capital of Raqa in 2017.

“We expect there will be an increase in the intensity of IS operations against our forces after the end of their military presence.”

IS has retained a presence in Syria’s vast Badia desert and has claimed a series of attacks in SDF-held territory.

The SDF have been the main ground partner in Syria of the US-led coalition created in 2014 to fight the jihadists.

Last month, US President Donald Trump announced he was ordering a full troop pullout from Syria, a move that left the Kurds feeling betrayed and exposed to Turkish attacks.

The minority has since turned to the government of Syrian President Bashar al-Assad to guarantee its survival, but Kobani said negotiations were proving difficult.

“Any political agreement should include the special status” of the Syrian Democratic Forces after they fought IS “on behalf of all humanity and even the Syrian army”, he said.

“This is our red line and we will not concede this.”

The Kurdish-led alliance “protected northeastern Syria… liberated these areas, and have the right to continue protecting the region”, Kobani added.

Assad’s government has gained ground against rebels and jihadists with key Russian backing since 2015, and now controls almost two-thirds of the country.

It is determined to reassert its authority over oil-rich SDF-held areas, which make up the lion’s share of the rest.

But after years of marginalisation, the Kurds are determined to keep some of the autonomy they gained during the eight-year war.

The SDF could “agree to be part of the national army of a future Syria, but only on the condition they keep their special status”, Kobani said.

Damascus has rejected self-rule in northeastern Syria, but Kurdish leaders started talks with the government in July in a bid to seek some form of decentralisation.

“The discussions are ongoing but have not yet reached any positive result,” he said.

The regime “keeps on thinking it can go back to the way it was before 2011 (when Syria’s conflict erupted).

It still hopes it can take military control of the whole region”.

“It needs… to understand that is impossible.”